skip to main | skip to sidebar

Yo Ho Ho - It's time to learn CPR Mateys!

Ahoy Mateys!
Aarrr you prepared to perform life saving CPR in the event of a shiver me timbers emergency?
Don't be a scallywag,  sign up for a class today at aarrr Inland Empire or Orange County campus!
Yo Ho Ho....HealthPro's number is 951-279-6110 or sign up online at hpec.org.
Posted by HEALTH PRO at 8:31 AM No comments:

A Heart Attack occurs when the blood flow that brings oxygen to the heart muscle is severely reduced or stopped. This happens because coronary arteries that supply the heart with blood can slowly become thicker and harder from a buildup of fat, cholesterol and other substances, called plaque. This slow process is known as atherosclerosis. If the plaque breaks open and a blood clot forms that blocks the blood flow, a heart attack occurs. 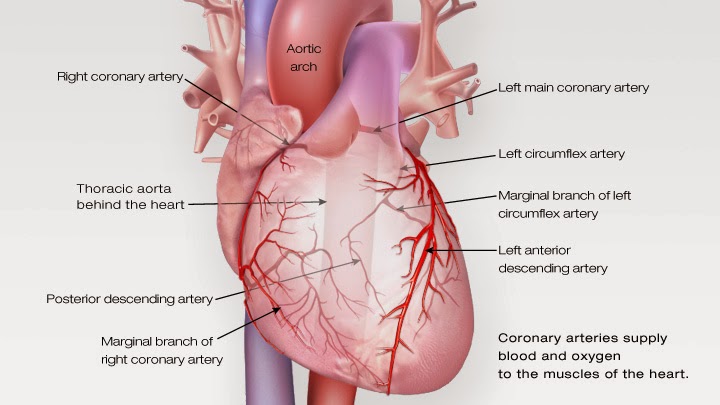 Posted by HEALTH PRO at 9:39 AM No comments:

The pressure is on to keep blood pressure down

About 90% of US children ages 6-18 years eat too much sodium daily.

10 common types of foods contributed more than 40% of the sodium eaten by children.

1 in 6 children has raised blood pressure, which can be lowered in part by a healthy diet, including less sodium.
About 9 in 10 US children eat more sodium than recommended. Most sodium is in the form of salt, as a part of processed foods. A high sodium diet can lead to high blood pressure. About 1 in 6 children ages 8-17 years has raised blood pressure. High blood pressure is a major risk factor for heart disease and stroke. Lowering sodium in children's diets today can help prevent heart disease tomorrow, especially for those who are overweight. The taste for salt is established through diet at a young age. Parents and caregivers can help lower sodium by influencing the way foods are produced, sold, prepared, and served.
As a parent and caregiver, you can:
Source:CDC

HealthPro is offering a PALS Renewal course this Saturday, September 20, 2014 from

Posted by HEALTH PRO at 7:24 AM No comments:

Laurie Heavener was talking with another mother outside her daughter’s Girl Scout meeting in Randolph, New Jersey, when her eyes rolled back in her head and she collapsed from cardiac arrest. A high school sophomore administered CPR, just one day after he received training.
More than six years later, Heavener was there to watch New Jersey’s Lt. Governor Kim Guadagno, serving as acting governor, sign a bill into law making the state the 19th in the nation to require students learn CPR to graduate high school.
“Put simply, this law will save lives,” said Guadagno at the bill signing. “These critical skills are easy to learn and can make all the difference in the world to someone in cardiac arrest. These skills can be learned in 30 minutes or one class period. Frankly, I can’t think of a better use of a half hour.”
The efforts to pass a CPR in Schools law in New Jersey began last year, when volunteers traveled to Trenton to speak with their legislators.
“We had been trying to get legislators to sponsor a CPR in Schools bill,” said Corinne Orlando, the American Heart Association’s government relations director in New Jersey. “Laurie shared her story with legislators during the June 2013 Lobby Day, and Sen. Diane Allen, R-Edgewater Park, agreed that day to sponsor a bill.”
A few months later, bills were introduced in the state House and Senate.
Then on May 15, Heavener returned to the statehouse to testify before the Assembly Education Committee.

“This law means that all of our kids will learn CPR. We are empowering all of our students to save lives. The boy who saved me knew CPR because his school thought outside of the box and taught it,” she said.
The bill passed with only one dissenting vote.
Cardiologist Dr. William Tansey III, an advocate for the law, said that “by teaching high school students this important skill, New Jersey will be creating a generation of lifesavers.”
“This bill is important not just to me, but to the 424,000 people like me who suffer sudden cardiac arrest each year,” said Heavener, a mother of four. “It’s amazing that only 11 percent survive. The only thing to save people is CPR or an AED. I can’t believe New Jersey is only the 19th state to pass this law. C’mon – all states should have this.”
Advocates continue to push in the rest of the nation for similar laws. In neighboring New York, a CPR in Schools bill passed the state Assembly and the state Senate this year – the farthest it’s ever gotten.

It currently needs Gov. Andrew Cuomo’s signature. From there, it must go to the New York State Commissioner of Education, who has 180 days to make a recommendation to the state Board of Regents to include it in the curriculum.
“Most sudden cardiac arrest happens in the home,” said Dan Moran, president of Next-Act in Colonie, New York, and chair of the New York State Advocacy Committee. “We need this law so that everyone has access to CPR.”
Access is a point on why advocates push for CPR to be taught through the school system.
“Our continued research shows disparities exist in learning and performing CPR, and we are ready to move beyond documenting gaps to finding solutions to fix them,” said Dianne Atkins, professor of Pediatrics at the University of Iowa. “School is a great equalizer, which is why CPR in schools is an integral part of the solution and will help increase bystander CPR across all communities and save more lives.”
Latinos and African-Americans are 30 percent less likely to have bystander CPR performed on them in an emergency, according to AHA research. People who live in lower-income, African-American neighborhoods are 50 percent less likely to have CPR performed.

The AHA is training students, teachers and parents via CPR in Schools to help eliminate inequities. Ross Dress for Less is supporting AHA’s efforts to help save more lives by providing free CPR training resources to public schools in lower-income areas
The AHA’s goal is to pair each Ross Dress for Less store with a nearby public school that has at least 50 percent of their students receiving free or reduced lunch.
Under the program, more than 1,100 schools in the U.S. will receive a CPR in Schools Training Kit, teaching materials and a tool that will track how many students they have trained.  Teachers also have access to AHA resources, volunteers and CPR in Schools staff throughout the program.
For more information:
Source: AHA


Instructor, Provider and Renewal Courses, Combo Course Options, Online Education, EMS and  Nursing CEU’s.  Sign up at hpec.org or give us a call at 951-279-6110.
Posted by HEALTH PRO at 10:16 AM No comments:

HealthPro is an AUTHORIZED TRAINING CENTER - align your training site with HealthPro today! Contact us at hpec.org or 951-279-6110.
Posted by HEALTH PRO at 10:36 AM No comments:

During September, emergency preparedness will focus on:
In collaboration with the American Red Cross, CDC's Web site, Emergency Preparedness and You identifies and answers common questions about preparing for unexpected events, including:
The Emergency Preparedness and Response offers additional information and resources under topics such as hurricane preparedness, extreme heat, and bioterrorism. CDC continually updates information on recent outbreaks and incidents, and lists emergency resources for the general public as well as for clinicians and public health professionals.


Get an Emergency Kit

Make plans with your family and friends in case you're not together during an emergency. Discuss how you'll contact each other, where you'll meet, and what you'll do in different situations. Read how to develop a family disaster plan or fill out the Homeland Security Family Emergency Plan.
Ask about planning at your workplace and your child's school or daycare center. The US Department of Education gives guidelines for school preparedness. Workers at small, medium, and large businesses should practice for emergencies of all kinds. See Ready Business for more information.

Being prepared means staying informed. Check all types of media – Web sites, newspapers, radio, TV, mobile and land phones – for global, national and local information. During an emergency, your local Emergency Management or Emergency Services office will give you information on such things as open shelters and evacuation orders. Check Ready.gov community and state information to learn about resources in your community.

Look into taking first aid and emergency response training, participating in community exercises, and volunteering to support local first responders. Contact Citizens Corps, which coordinates activities to make communities safer, stronger and better prepared to respond to an emergency situation. Contact the Medical Reserve Corps, (MRC). MRC are community-based units and function as a way to locally organize and utilize volunteers who want to donate their time and expertise to prepare for and respond to emergencies and promote healthy living throughout the year.
Homeland Security promotes emergency preparedness all year round via the Ready America campaign. Checklists, brochures, and videos are available in English and in Spanish online and by phone (1-800-BE-READY and 1-888-SE-LISTO).


Come Get Prepared at HealthPro in honor of National Preparedness Month.  We offer several courses that will enable you to respond to those in need in the event of a life threatening situation.  Sign up online at hpec.org or give us a call at 951-279-6110.
Posted by HEALTH PRO at 10:57 AM No comments:

HEALTH PRO
I WAS BORN IN KANSAS CITY MISSOURI. I HAVE THREE GORGEOUS SONS AND 5 BEAUTIFUL GRANDCHILDREN. I HAVE THE MOST WONDERFUL HUSBAND IN THE WORLD. I HAVE RETIRED FROM NURSING AT THE BEDSIDE TO TEACH NURSING IN THE CLASSROOM. OH, AND I HAVE 6 SISTERS AND 4 BROTHERS